Segovia's first experience with guitar was with the flamenco music played in town. When Segovia met Almadovar playing the classical music of Tarrega he learned that classical music of various composers are in print. Due to economic problems and the difficulty of finding a worthy instructor, Segovia moved to Cordoba and decided he would be his own instructor and pupil.

Andrés Segovia was little bit selfish man with very high ego from his early age. After reading review of his first concert at age 16 in Paris, he anointed himself as “the Apostle of the Guitar.”

Segovia pushed luthiers to experiment with new woods and designs, which could increase the natural amplification of the guitar. For long time guitar strings were made from catgut (made from the intestines of animals such as sheep or goat), in the 1940's Segovia collaborated with Albert Augustine and Du Pont to produce the first nylon guitar strings.

5. Segovia was a workaholic.

He passed 50, then 60, then 70 and moved into his 80's still practicing five hours a day. When asked why he continued to work so hard at his age, he replied: “Because I will have an eternity to rest.”
Segovia gave 5,402 concerts, appearing on stage every year from 1909 to 1987. He toured 60 countries and 723 cities. He produced about 50 long-playing records, most available today in CD format. Segovia participated in hundreds of broadcasts and television appearances, and in the 1950s began giving master classes.

Segovia criticized modern flamenco guitar — perhaps referring to Paco de Lucía and his generation, but more likely to earlier players including even Sabicas. “I love the flamenco, but the TRUE flamenco — not the flamenco heard these days" Segovia said. "Today’s guitarists are more theatrical, they want to show their technique, to dazzle the public with pyrotechnics."

Segovia was awarded the 1958 Grammy for 'Best Classical Performance, Instrumentalist' for his recording at the Segovia Golden Jubilee.

In 1981, Andrés Segovia was honored by the King Juan Carlos I with the 1st hereditary title of ‘Marqués de Salobreña’ in the nobility of Spain in recognition of his contributions to music and the arts.

Andrés Segovia was married three times. In 1918 he married Adelaida Portillo. In 1944 developed a relationship with the Brazilian singer and guitarist, Olga Praquer Coelho for over 10 years. In 1935 he married pianist Paquita Madriguera. At the age 69, in 1962, Segovia married third time with Emilia Magdalena Corral Sancho, Brazilian singer and guitarist. Eigth years later, in 1970, they were blessed with a son, Carlos Andrés Segovia, in 1970.

Fifteen years after death Andres Segovia's remains were exhumed from the Madrid cemetery where he originally was buried and brought to Linares in Jaen province, the heart of Spain's olive-growing region. Segovia's widow, Emilia, avoided moving his body to Linares, even though it was his wish, until a proper resting place was prepared in 16th-century refurbished palace
with a museum dedicated to Segovia's life and work. 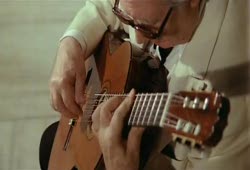 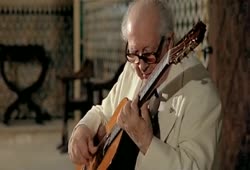 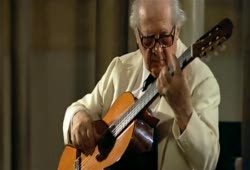 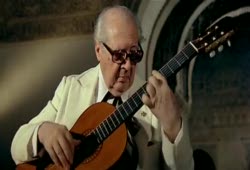 "When I began, the guitar was en-closed in a vicious circle. There were no composers writing for the guitar, be-cause there were no virtuoso guitarists"
"I've had three wives and three guitars. I still play the guitars"
"The guitar is a small orchestra. It is polyphonic. Every string is a different color, a different voice"
"Music is like the ocean, and the instruments are little or bigger islands, very beautiful for the flowers and trees"
"Among God's creatures two, the dog and the guitar, have taken all the sizes and all the shapes, in order not to be separated from the man"
"My most happy moments are when I am with my art and my family."

Do you know other interesting facts or stories related to Andrés Segovia?
Feel free to comment below.